It seems a lot of expectations have been placed on the shoulders of 5G technology.  More speed; less latency. This will enable many of our newest technology dreams. But, let’s step back for a minute. Time tells us that a new “G” technology becomes available every decade. 3G, rolled out around 1998, and was the first generation of wireless mobile network to allow data transmission such as video and mobile internet access. In 2008, 4G, came along and brought us the lightning-fast speeds and more bandwidth, and with that, the ability to stream in HD.

Then… why isn’t 4G good enough anymore?  Honestly, for almost all cell phone users, it is. Currently,  the 5G compatible devices that are being sold, are pretty much waiting around, continuing to use 4G service. Mind you, customers aren’t necessarily being ripped off, since their 5G devices will be capable of utilizing the services as they come online, but updating a phone or other device solely for the purpose of having 5G capabilities could be a premature move. The mobile phone makers and carriers benefit from this consumer confusion since customers are now paying for new phones and a ton of unnecessary bandwidth before they need it.

Mobile network operators around the world are rushing to deploy 5G networks to serve the demands of the increasing number of devices, users and businesses that are connecting to mobile networks. Though smartphones are already universal, the increased use of mobile broadband adapters, personal Internet of Things (IoT), and enterprise IoT devices, demand faster data movement than current 4G networks can deliver. Smartphone manufacturers have rushed to be the first to market with 5G phones. Some mobile network operators and smartphone manufacturers label proprietary network technologies as being 5G, though these devices will not receive all of the benefits that "true" 5G will eventually offer. The truth is that 5G is more profitable for cell phone carriers because the currently increasing bandwidth demand on a 4G network would be much less expensive to operate on the new 5G network, which is designed for that bandwidth demand.

Most consumer’s knowledge of 5G technology, stops at better cell phone service, and for the short term, that’s probably all they need to know. However today’s version of 5G’s technological possibilities, differs quite a bit from what is to come in the next few years. Tomorrow’s versions of 5G will impact many more applications and industries across the board. But it’s not fair to dismiss 5G as unimportant or not ready yet. Much of the excitement is truly warranted. We’ll look at some of the more specific examples later, but one of the biggest changes will be the connectivity within your own home.

Why has the talk around 5G has been so prominent? 5G won’t necessarily impact the way we use our mobile phones, but it will change the way we connect to the internet at home. Instead of your Wi-Fi router plugging into a wired connection at your wall, there will be a “fixed wireless”; meaning your home network will be wireless on both sides of your router. Not only will your Wi-Fi router feed your wireless devices, your router will receive its signal wirelessly as well.

The Technical Details of 5G

Digging too deep into the details of 5G would go beyond the scope of this blog, and into facts that may change three times before you read this, but first we’ll try to loosely understand three main uses for 5G as they are defined by the ITU-R. They are:

Only eMBB is deployed in 2019. It uses 5G as a progression from 4G LTE. Essentially to handle improved cell phone services.

URLLC will use the 5G network for critical applications that need to exchange large amounts of data without interruption. mMTC will likely be used to connect a large number of low power, low cost devices, having high scalability and increased battery life. URLLC and mMTC are several years away in most locations. 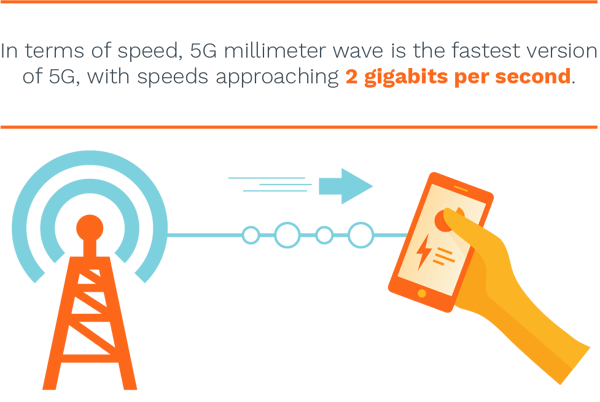 This speed comes with a compromise though. The reach of the wave is short, causing a requirement for more cells. Millimeter Wave also has difficulty passing through solid surfaces like walls and windows, posing some challenges for indoor coverage. 5G mid-band is the most widely deployed, its reach is better than other 5G networks. Many areas can implement it inexpensively by upgrading existing towers. 5G low-band simply offers capacity to similar to advanced 4G.

One important thing to note about 5G is that it’s not an incremental or backward-compatible. It does not overlap with 4G standards like LTE, and it cannot be delivered to pre-5G phones or other devices by means of tower upgrades or software updates. 5G fixed wireless applications will initially rely on fiber broadband connections. The 5G tower will connect to legacy high-speed fiber networks currently part of the internet infrastructure, then transmit to customer location equipment wirelessly.

As we move toward 2020, it will become clear that 5G is not about fast download speeds for phones and laptop devices. With the infusion of countless Internet of Things (IoT) devices, the constraints of 4G LTE technology are pressing mobile network providers to commence a faster rollout of 5G communications to keep pace with the network demands of today and the immediate future. Here are some real world applications that will improved by 5G technology:

5G technology will connect some of the 50 billion connected IoT devices. Consider the visions we can achieve with the Internet of Things that will be employed, such as: 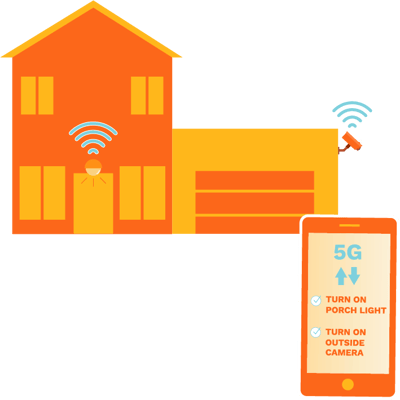 Currently there are more than 12 billion devices that can connect to the Internet. Estimates for the year 2020 are over 200 billion. The question isn’t what will we be able to do, but what won’t we be able to do?

With the move toward smart cities, the advent of autonomous vehicles becomes much more important. When you think of the city of the future, with a significant number of autonomous cars driving around the streets, and each other, there are an endless number of wireless solutions that will need to be deployed to allow this innovative vision to become a reality. Smart transportation services will depend upon many IoT technologies, integrated through 5G connectivity, to ensure safer transportation. In order to ensure the safety of autonomous vehicles, we’ll need to see more communication between vehicles, and between vehicles and traffic signals. These communications should not only make autonomous driving safer, but could alleviate traffic congestion.

With it’s lightning speeds and reliability, it would be ideal to have all devices connected to the fiber optic infrastructure, but the basic need to handle and control the mobility requirements of the expanding IoT is forcing wireless networks to evolve faster. 5G is the conduit for connecting the mobile devices that meet our current and future needs. The only limits will be those of our own imagination.

Cybersecurity is serious business. In fact, you would be foolish not to take security seriously in the current threat landscape. As the current...

The fastest way to destroy your reputation is significant downtime. While disasters can happen at any time, it’s how you handle them that matters....

Horror Stories from the Dark Web

Dark web horror stories are quickly becoming the norm. Whenever you start trawling through the web pages, it's not uncommon to find a whole universe...