SD-WAN vs MPLS - What is the Difference

As your company grows, there is the need to build networks to connect offices located in different geographical regions. A rise in geographic distribution usually has effects on network performance and costs. When choosing a network architecture for the organization, CIOs and IT teams often ask themselves whether to use SD-WAN or MPLS. In making this decision, IT professionals usually consider performance, reliability and cost. If you’re the ultimate decision-maker, you may want to know which one is the superior choice. In this article, we’ll describe each of these infrastructures, explore their benefits and perform a comparison to help you decide whether you should choose SD-WAN or MPLS. 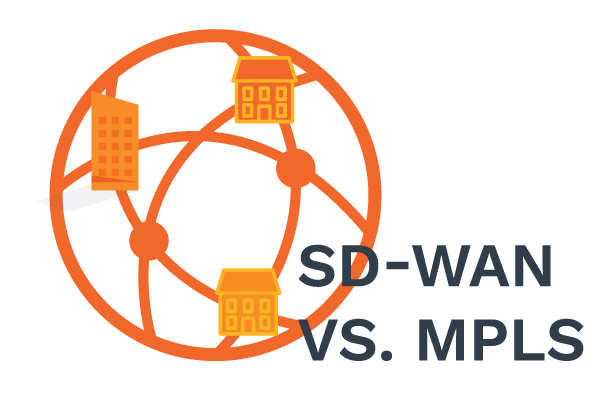 MPLS enables your firm or service provider to create an extensive network that handles all your traffic over a single infrastructure.

The technique was enacted at the turn of the century to boost the less efficient Internet Protocol (IP) routing. In a traditional IP routing procedure, each router would independently determine where the packet would go next by looking up the packet’s destination address then comparing it to values in its routing table. This was time-consuming and reduced performance in real-time services such as video and voice.

MPLS architecture helps you reduce infrastructure costs and delays by introducing a label to the packets. The first router determines the entire path to be taken by the packet, and puts it in a label for all other routers to see. All other routers direct the packet on the route determined by the first router. With reduced latency in packet transmission, MPLS can help your employees run mission-critical applications for optimum productivity in your firm’s systems. You also reduce the complexity of your IT infrastructure, which eliminates additional points of failure. 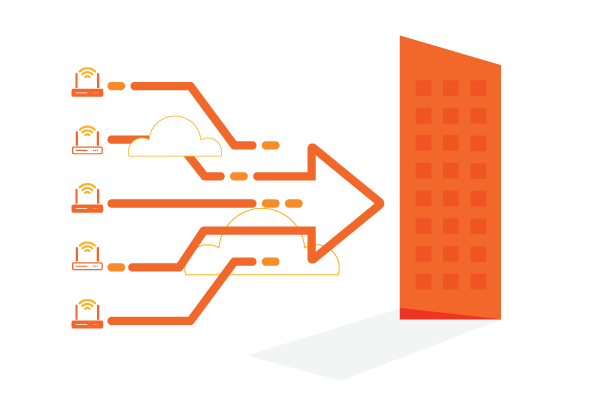 MPLS brought improvements to earlier technologies such as IP routing and Asynchronous Transfer Mode (ATM) networks. It is good for real time applications that require low latency such as voice and video. MPLS also allows different services (data, voice, video) to be run on the same network. With MPLS, IT administrators and CIOs can preprogram network equipment with different priorities and service classes, meaning you can assign different bandwidth percentages to different services. MPLS networks are also highly scalable.

An SD-WAN consists of a virtual overlay of a network that has been abstracted from its hardware. Basically, all network infrastructure functions are hosted within a software solution.

The abstract architecture allows companies to leverage other data transport services- such as the internet or MPLS- to securely connect branch offices to company resources and applications. The network takes advantage of a centralized control function to direct traffic across a Wide Area Network (WAN). With SD-WAN, you get an increased application and network performance coupled with a high grade user experience. This often reduces IT costs and increases business agility, productivity and scalability.

Unlike traditional network architecture that relies on hardware configuration, SD-WAN fully supports applications hosted in data centers, the Cloud and Software-as-a-Service platforms while delivering maximum levels of performance. An SD-WAN provides application-aware routing across the network infrastructure using intelligence to identify applications. As more enterprises adopt cloud and Software-as-a-Service applications for business operations, there is the need for a network configuration that supports both Cloud and on-site applications. The SD-WAN does this without introducing latency or reducing the performance of applications. 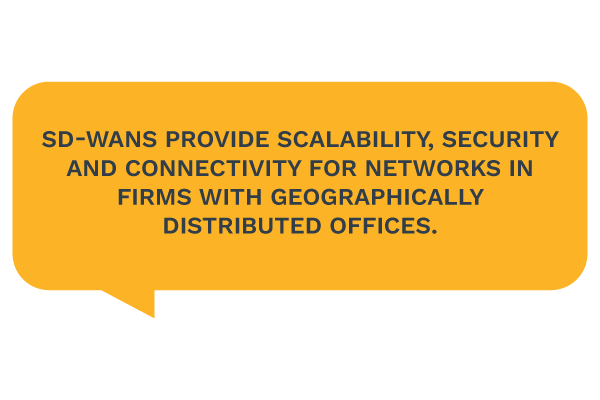 SD-WANs have been hailed as game changers in network architecture. These networks enable cloud-based enterprises to give an advanced quality of experience for the users. SD-WAN architecture has proven superior to MPLS because it eliminates the latency and performance issues that traditional networks had when backhauling traffic between branches and headquarters. Virtualization also enables simplification of WANs. This network architecture has lowered IT costs, improved bandwidth efficiency and created a seamless ramp to the cloud without affecting application performance. This has made SD-WANs a top choice especially for critical company applications since it does not sacrifice data security and user privacy.

So, What’s the Difference?

Traditionally, MPLS and the internet were the most popular connectivity options out there. Recently, IT administrators have added an SD-WAN overlay to simplify the WAN and improve cloud connectivity. Both network architectures have their merits and demerits, which make them suitable for different functions. SD-WANs are less costly, more secure and enable a higher network performance compared to MPLS. Companies that opt to switch to SD-WAN hail it for enhancing visibility, availability and freedom of action. To understand whether your organization needs to make the switch from MPLS to SD-WAN, we shall discuss the strengths of each.

Why You Should Get SD-WAN for Your Networking Needs

SD-WANs are More Cost-Effective Than MPLS

Traditionally, firms used a hub-and-spoke model that relied on an MPLS connection to connect remote locations to the central data center. This means that all data, workflows, and applications had to be backhauled to the on-site data center for distribution and processing. The SD-WAN configuration, on the other hand, uses a distributed, secure data exchange and control points to provide an optimal, multipoint connectivity that reduces costs. The SD-WAN is a cost effective solution that allows your users to access all the services they need, whether from the cloud or company network, while granting private access to company resources.

MPLS networks offered the added advantage of providing a secure and managed link between branch offices and the main data center using the ISPs link. However, with an MPLS connection, your IT team will still need to monitor traffic for malware and other exploits. 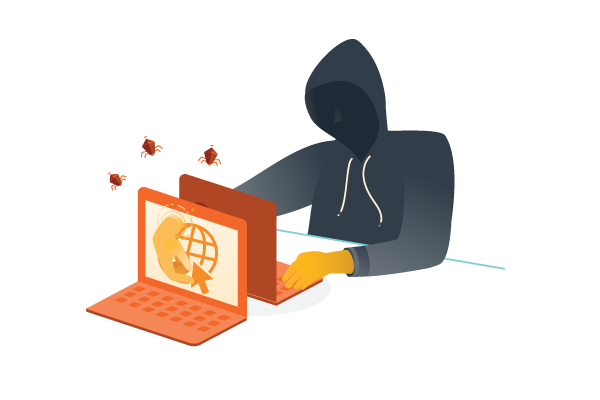 This usually brought in the need for a firewall. With SD-WAN, you can add security as an overlay solution. A secure SD-WAN connection uses a wide array of safety tools to secure data in transit. Security tools that can be deployed in a virtualized WAN environment include Intrusion Prevention Systems (IPS), web-filtering, anti-virus and anti-malware solutions.

Performance-wise, MPLS networks offer a fixed, reliable level of bandwidth. When firms deploy an MPLS network, they lease a connection that can handle their heaviest traffic loads. This means that most of the time, expensive bandwidth lies unused. Modern devices also generate expanding volumes of data, and the fixed bandwidth network could constrain connectivity. Additionally, some company applications have latency requirements that require constant monitoring. MPLS does not provide a platform for prioritizing latency-sensitive traffic needs for applications running in the same channel.

SD-WAN acknowledges that some applications are high priority while others are not. Using an intelligent control function, the network can initiate several parallel connections and provide fragmented load balancing between them. These intelligent networks are capable of enacting a fail over to a new connection tunnel if there is a drop in available bandwidth. These networks also rate sensitive applications to make sure that low-latency applications receive all the resources they need. SD-WANs therefore provide faster application steering for mission critical applications.

MPLS provides a clean, secure and reliable connection that is suitable for specific types of data and company applications. The MPLS network architecture is particularly desirable in applications that require a high degree of integrity and privacy. MPLS is the configuration of choice when conducting critical transactions. Since both technologies are complimentary, you can overlay SD-WAN over MPLS to add the benefit of security to these connections. 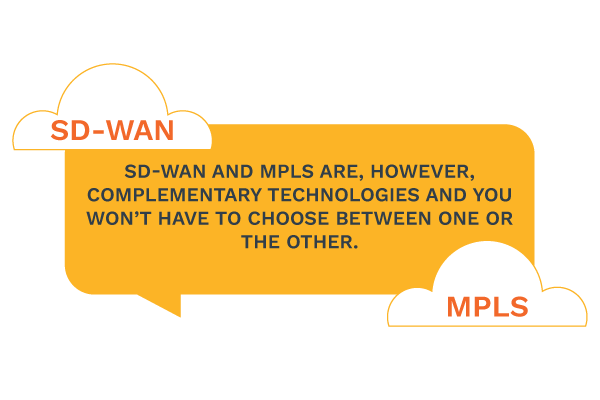 You can use SD-WAN as an overlay on your existing MPLS configuration to help your existing infrastructure run more efficiently. SD-WAN will help reduce some, not all of your MPLS costs. SD-WAN will provide a platform to manage traffic over your network infrastructure. The control function will allow mission critical applications to be transmitted through MPLS, while low priority applications can be sent over broadband internet. SD-WAN can provide necessary redundancy by rerouting data to alternative channels in case there’s an issue with the MPLS. By combining the reliability of MPLS and the security of SD-WAN, you can keep your data safe and sound while ensuring optimum performance of company applications.

Which One is Right for Your Firm?

The benefits of an SD-WAN solution far outweigh those of MPLS alone. Modern enterprise traffic requires a flexible and dynamic connection that MPLS architecture cannot provide. Modern business communication involves critical web applications and complicated workflows, which can be properly handled by an SD-WAN control function. SD-WANs provide deeply integrated security which helps reduce management overhead. SD-WAN configuration also extends application visibility and control beyond the central IT console to the edges of the WAN.

In any firm, it is important to deliver a high quality of service coupled with top-notch security. For this, you will need a network that is robust and resilient. A combination of SD-WAN and MPLS can achieve this. The MPLS provides a reliable, secure connection while the SD-WAN provides a way of managing the flow of traffic intelligently. By understanding your business needs, you can determine the right network infrastructure combination to help achieve your goals.